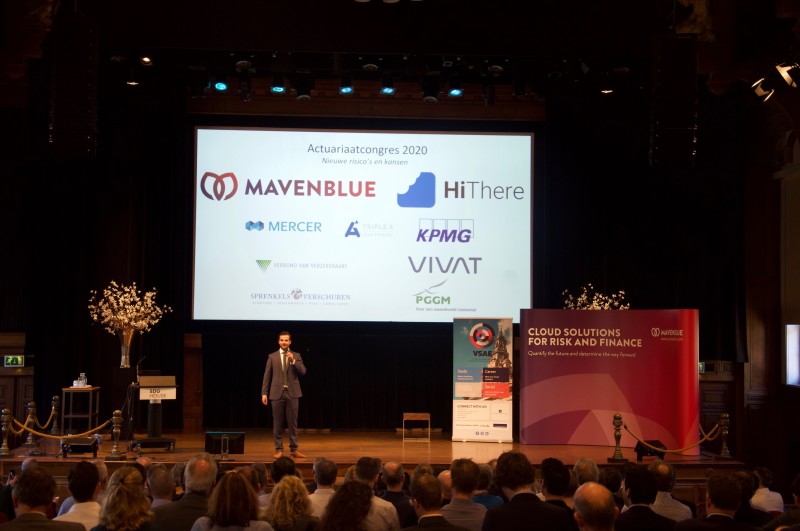 On Tuesday, March 3, 2020 it was time for the 20th edition of the Actuarial Congress. The congress took place again at the KIT Royal Tropical Institute in Amsterdam. The theme of this year’s edition was ‘New Risks and Opportunities’ (Nieuwe Risico’s en Kansen).

With all the new technologies and possibilities in today’s world, also the world of Actuarial Science is touched by these changes. The actuary no longer only has access to old methods to do his/her work. Also new solutions within Actuarial Science come with all the new technological developments and innovations, for example the field of Data Science.

At the Actuarial Congress of this year, speakers could elaborate on these subjects and discussed what the modern actuary looks like and what type of work it does. This was done during four plenary sessions, eight interactive sessions and a discussion panel.

The day began with a warm welcome from the chairman of this year’s committee, Ramon Soesan. Which was followed by an opening speech from Jeroen Breen, the chairman of the day. Jeroen Breen had the grateful task of taking us through the programme of the day. It started off with a plenary session from first Linda Vos and second Sjors Altemühl. After the first break people were divided between four different interactive sessions. After the lunch break it continued with a plenary session from Jan-Huug Lobregt and Daan te Riele. And lastly after the third break we had another four interactive sessions followed by the discussion panel and a closing speech from Jeroen Breen.

Linda Vos (PwC) talked about something very interesting. She, together with a team of Swiss PwC actuaries, developed a model to help doctors with choosing the right type of therapy for patients who are diagnosed with MS. Doctors could use an online app to consult the model. They used actuarial models to make this model out of data that was gathered of MS patients from 1999 on. She told us that it was difficult to explain to doctors why they could use it, because they are suspicious. Something that Linda made clear was that the model should be used as an advice and not something binding and isn’t supposed to replace the clinical knowledge. This presentation gave an interesting example of how actuarial knowledge could be used within other fields and that models shouldn’t be used blindly.

There is a lot of development within the field of Artificial Intelligence (AI) concerning Machine Learning. Sjors Altemühl (Milliman) talked about the use of Machine Learning predictions models within companies like insurance companies. These models could predict with much more certainty than the classical prediction methods that actuaries use, but also comes with more uncertainty and less explainability. Sjors makes the statement that this is where the actuary comes in and why the actuary is still needed. The actuaries are the ones that could make the choice between which models to use and are the ones that could check whether these methods don’t go against the desired honest and controlled business operations within, for example, insurance companies. This was again very interesting to hear about.

After four interesting interaction sessions and a delicious lunch, Jan-Huug Lobregt (PwC) talked about why actuaries are very much needed and that there is still going to be an increasing demand for actuaries. For example, the implementation of IFRS 17 and the evaluation of Solvency II. Actuaries are the ones suited for this kind of work. Also other risks than pension fund and insurance risks are asking for people with knowledge about how to asses risk. For example, customer behaviour and loyalty programmes were there is an uncertainty about when the customer is going to redeem its saved points for a free product or something like that. The actuary is something more than pension funds and insurances, the actuary is an overall risk specialist.

At last, Daan te Riele (MavenBlue) talked about the use of the Cloud within companies, which comes with much more computing power. Instead of having every department working on their own sheets which are all different and cannot be combined, MavenBlue developed a Cloud based programme were everything is in one place. Therefore it is much easier to work on for example balance management in this Cloud based environment. With all the data in one place, Daan told that it is also much easier to analyse all the data and draw conclusions from the data. Also MavenBlue uses GPU instead of CPU. GPU’s can do many small calculations at the same time, where the CPU is more powerful but could not do as many calculations at the same time as a CPU. Therefore the product of MavenBlue could save a lot of time if used by companies.

After the last four interactive sessions, which were again very interesting, the discussion panel took place and a few statements/questions were discussed. Some of them were; Are regulations always positive or could there be too much regulation?; Should there be better supervision on data methods and models?; Ethics and integrity receive insufficient attention in daily practice; Models become too complex. Most of the time they had approximately the same opinions, but there were also some good discussions which was very interesting and insightful for the audience.

The congress was closed with a speech by Jeroen Breen. Jeroen was a good chairman of the day with good knowledge of his profession. Also the committee did a great job in organizing this year’s Actuarial Congress.