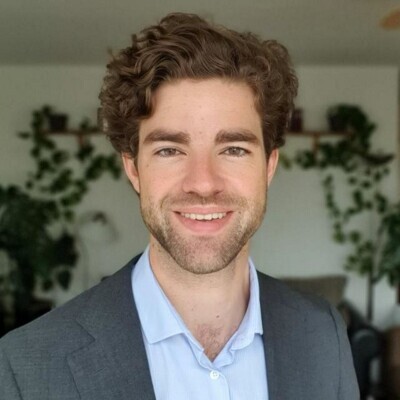 On monday the 11th of april I went to the (temporary) settlement of De Nederlandsche Bank (in short DNB), the Dutch institution that works to safeguard stable prices, smooth and safe payments and robust and reliable financial institutions. In short, a stable financial system. When I walked into the tall building, I already saw an employee of DNB working out in the company’s gym. I got my visitor’s pass and met with Guus Smit. We grabbed a cup of tea and went into a room opposite of the company’s bar where later that week would be an espresso martini borrel.

Nice to meet you Guus, can you tell me something about yourself and your education?

After that, I switched to do a master’s in econometrics. I did this because I didn’t see myself working as a physicist. I found that workfield too much focused on society’s technical challenges, a job including the social interface appealed to me more. There are many different and conflicting interests involved in the financial sector, so that’s why I switched to a master’s in econometrics (instead of physics). During my master, I specialised in operations research. Looking back, that wasn’t such a good choice because I wanted to work in the financial sector. That’s why I first started working at Deloitte as a consultant: to learn more about the working field in a short time; what there’s to do, what kind of things are happening. I didn’t love working at Deloitte, because I didn’t think that at that time there were enough interesting projects for me. So I decided to look for something else. I looked at AFM (Dutch Authority for Financial Markets) and DNB and I chose DNB.

During my studies, I was a member of a student association called Albertus (sister society of LANX from Amsterdam) and I was also a member of the study associations of applied physics and, during my master, econometrics (VESTING).

And what about your hobbies?

Before covid happened, I used to work out at the gym at DNB three times a week. But then we had to work from home, so I bought a sports bike like a lot of others did. So I started cycling and right now I’m training for a triathlon. And I recently dusted off my guitar, so I started playing guitar again.
Moreover, I do some things at young-DNB where I am in the audit committee. Young-DNB is the organisation of employees under 35. DNB has around 2100 employees and around 700 of them are under 35. Young DNB organises borrels and I actually went on a skiing trip with them not so long ago!

Do you miss physics?

I do miss it. As an econometrist you are looking at what is happening in the world and how it affects people, in physics it’s not about real people and society, but about the way the universe works. And that’s cool about physics, that you’re looking at things that happen at cosmic scale but also at a subatomic scale.

How did you find your job at DNB?

I just opened the vacancy site of DNB and searched for a vacancy that was looking for an econometrist. I went into it with an open mind.

Would you say that it is easy to find a job as an econometrist?

There weren’t that many vacancies at AFM and DNB when I was looking. But I know that my department has an open vacancy and I experienced that it is really hard to find an econometrist to hire. So I would say that finding a job as an econometrist is not that hard.

What is your function at DNB?

I work in a department of around fifteen people as a supervisor of insurance companies. Supervising is one of the main tasks of DNB. Another task is monetary policy but that is something I have not much to do with. I look at how insurance companies are doing and if they are “healthy”. For checking if an insurance company is healthy, we need to establish what it means for a company to be healthy, so we need models. That’s what I’m mostly working on. I supervise both big and small insurance companies. But larger companies sometimes make their own models. And part of my job is also to check those.

Something I really like about my job is that everything that I’m working on are things that are relevant to the board of directors of an insurance company. So the stuff I’m working with is actually really important!

To what extent do the things you learned during your studies come back in your job?

A lot! That’s why I really like doing what I do. Because I really need to apply my professional knowledge to my job. I had a course in my master’s about copula’s and right now I’m working a lot with everything regarding copula’s. And in the past I have grabbed my study books from my master’s again to understand a model and its results better!

And as for my study in physics, I don’t directly use the substance of the courses. But I do apply the way of thinking in my job. "For example, deciding whether an estimation is in the right order of magnitude, because that's something that was really hammered on in physics!"

What are things that you only learned during working at DNB?

A lot of things about the legislation of insurance company’s. There is a lot to learn about that. Also with yield curves. I know some stuff about it from my study but now I actually have to build one and know what it is based on. We sometimes have discussions about the basis of a yield curve when someone is building one with a certain basis and someone else uses a different basis. Because that basis can mean a lot for an insurer’s balance. So I’m especially learning a lot about legislation and how it affects insurers. I’ve come to realise that it is a super interesting and complex world, the world of insurance.

What is different from working at DNB compared to any other company?

DNB is a very unique organisation. Mostly because it is very focused on the content and not so much on an end-goal. And that makes the job hard but also interesting. We have a lot of important discussions about “Are we still doing the right thing? Are we still supervising the right things?” I work in quite a small team and together we want to point out the risks of insurance companies that they themselves may have missed. And that is, in my opinion, really different from working at the insurance company itself for example. Because insurance companies have a much more concrete end-goal.

What does a normal day working at DNB look like for you?

One of the fun things of my job is that I have a lot of different projects happening at the same time. So, for example, I’m working on a model review and at the same time on an inquiry and helping another department on their discussion on a new policy. Take for instance the French supervisors wanting to change the legislation, then I get asked what my opinion on their proposal is and how it’ll affect the French central bank. Moreover how it will affect us, our insurance companies and the rest of the European insurance companies, because it’s European legislation. I am also involved in a European working group where we try to compare all of the models used in Europe.
On top of that am I working on a yearly report for our department right now. So everyday I’m working on different things, which is something I really enjoy! Lucky for me I can plan my days how I want to and if I want to work at the office or from home. I am really free in my decisions about how I want to work and I feel a lot of trust from the company.

How can an econometrics student end up at DNB?

And how can an econometrics student get into DNB?

DNB has some internships, which is a good way to get into the company. And we have the traineeship, where you can actually sign up for right now. And each year there are some trainees with a background in econometrics. Or you can look at the vacancies, just like I did!

Who could be interested in a job at DNB?

I see a lot of idealistic people working here, so people who really want to make the world a bit better and who do not feel energised by achieving commercial goals. You could be a good fit here if you’re interested in the contents and like to grab a project with both hands and really get into the details of it.

And someone fun for at the borrels?

Haha yes! But if you don’t like that, DNB is still a fun place to work. You don’t have to go to every borrel to get along with your colleagues. It’s not really a case of FOMO.

Do you have something to add?

It can be quite difficult to decide what kind of job you are going to start with. I found it very difficult as well, but I just went with something which was, in this case, working at Deloitte. You just have to experience it. And I experienced it and I changed my course and went to DNB. Not knowing if DNB was going to be the right fit, but to my luck it was. But everyone has to discover that for themselves, because you’re never sure until you’re working somewhere.