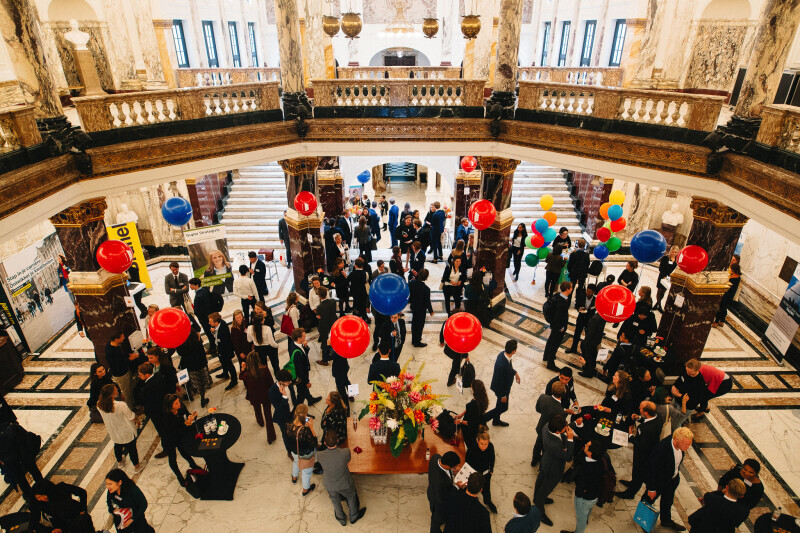 Last Tuesday and Wednesday (1&2 October), the Beroependagen event took place for the 22nd time. This event is organised by a committee consisting of both members of the study associations VSAE and FSA. It is an event that connects future employees with future employers during various activities like presentations, workshops, dinners and this year even a Barista workshop. For those who weren’t able to attend this event and for those who attended the event and are maybe thinking about joining the Beroependagen committee, we’ve asked some questions to Sara Ouaj (VSAE), member of the Beroependagen committee, about organizing this event.

Why did you want to organize the Beroependagen?

When I started the committee, I was just finishing my Bachelor and I wanted to improve some skills other than Math and Statistics!

When did you start organizing the Beroependagen as a committee?

We started 1 month after the previous edition of the Beroependagen.

How much time did you approximately spend on organizing the Beroependagen weekly?

At the beginning, it was not that much but during the summer break and the first month of the academic year, we had to work really hard to acquire the last companies, finish up the promotion materials and actually do the promotion to reach the students to sign up for the event.

Did companies apply themselves or did you have to actively search for companies?

No, we had a great acquisition team that contacted the companies and kept them up to date until one day before the event.

What were the biggest obstacles you’ve faced while organizing the Beroependagen?

A lot of recruiters had out of office emails and they were hard to contact and their budgeting timeline did not align with our acquisition timeline.

What was the most fun about organizing the Beroependagen?

The people! Though we had to keep on meeting during the summer break, we had a lot of fun. One time we had a meeting at 8am at roeterseiland in August and we still managed to laugh it off.

What did you learn from organizing the Beroependagen?

To communicate clearly and to be persistent.

How was it to work together with members of the FSA?

Can you tell something about the location and why you’ve chosen this location?

It was the third time that it was held at the Royal Tropical Institute (KIT) and it’s a really special location. But since we’re regularly organising the Beroependagen in the (KIT), we were able to reflect on past events. Together with the team at KIT we could improve some worklines and be more efficient.

Did you attend some activities yourself as committee during the Beroependagen?

Some presentations, however we were too busy running around.

What did you enjoy the most during the Beroependagen?

Since the location was quite big, we’ve made sure that we had in-ear walkie talkies. At first I thought I was going to hate it, but it was quite fun to look serious and joke around with them.

Did you hear some nice stories from participants about how they’ve experienced the Beroependagen?

Yes! We got a lot of compliments for the organisation from both students and companies. They liked the location and each other and this year we’ve also added the Barista Workshop and it was great according to the students, recruiters and our Barista guy Dave.

What can people expect when applying for the Beroependagen committee?

That you have to work hard but you’ll also have a lot of fun!

Do you have some tips for people to increase their chances to get into the committee?

Just be yourself, since you have to work together with a lot of people you have to have a connection with the rest of the committee.

Do you maybe have some last words for people who missed the Beroependagen this year or maybe want to apply for the committee for next year?

To everyone who came out, thank you!