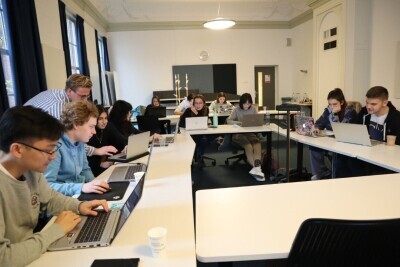 Q: Welcome, and thank you for participating in this interview! To begin with, how did you find out about the Analytics Academy? What made you apply?

Francesca: I found out about it when I was in my first year, on the VSAE website. However, I thought I was too young to participate in it, so I decided to apply two years later. After two years, I wanted to analyse something more practical, as the level of experience at Analytics Academy was much higher. And another main reason why I applied was that it would also be a challenge for me.

Nagia: During Covid I tried to join every VSAE event there was. This included the Analytics Academy events. I already tried joining last year, but because there was a line and I was a second-year student, I didn't get in then. I applied because I was interested in the projects and the trainings.

Camden: I learned about it from an email, and then asked the VSAE about it. I decided to join because it’s a constructive thing to do, to work with a real-life organisation.

Jelle: I found it via Whatsapp, through the Econometrics chat. A friend of mine said we should do it together, because we thought that was how it works. I went to the Kick-off with my friends, where, in the end, I found out it was not like that. But that didn’t matter too much to me, it seemed fun anyway

Q: What is the Kick-Off, and what was your overall impression of it?

Francesca: The Kick-Off is the event where the organisations presented their projects. I thought they were ambitious. StC especially had a lot of trust and wanted results that could be used later on. I liked it and almost cried when Manon from StC presented and when she played the video from the organisation. I was proud to say I would work with them for a couple of months. Even though I was a bit scared at the start, I thought: we’re four hardworking people, and we will manage to finish it.

Camden: Overall, I thought the projects were pretty good. Dennis was supportive; he encouraged us to be creative, so we had a lot of freedom. The Kick-off was a good opportunity to meet everybody, and the nice location added prestige to the whole thing. Also then, Dennis was helpful.

Q: What did you do during the trainings? Did they help you in any way? If so, in what way?

Camden: The first training was about data preparation; the second about working with the data; and the third about presenting, how to make a story out of it. I liked the first one, because it taught us a new way which was helpful. The people there were our own age and supportive. The second training was also good; in general it was nice to learn buzzwords, which people in the industry are using. The final training taught us how to present and clearly express ourselves, which proved to be helpful.

Nagia: The first training was great. I remember being interested in finding out how these kinds of businesses work and how they operate. Overall it made a great first impression. It got me interested in looking into my future. During the second training, we looked into Python, which was great. I really enjoyed the trainings.

Q: What is the Kick-Out, and what was your overall impression of it?

Francesca: Before the Kick-Out, I was worried about disappointing Manon. I wanted our work to be understood, because a lot of effort was put into it. It was great to receive feedback after all the months of work. The two organizations were great; Gemeente Amsterdam showed they care, and StC is a world-renowned company. It helps understand reality a little bit better. Understanding that they really need help studying and organizing data was interesting. It was a once-in-a-lifetime opportunity. It was extremely useful from our side. Hopefully it will be useful to the organisation's side as well.

Jelle: Pretty good. All the presentations were nice, though it was unfortunate that it had to be through Zoom. It would have been nice if it could have happened a month later in person, but even under these circumstances it was well organized. Everyone had a good presentation and thus a good ending of the round.

Q: Final word for people who are thinking about joining the Analytics Academy?

Francesca: Beforehand, you have to see if you have time for it. It is doable with a regular time schedule and it’s not too overwhelming. It’s a challenge and shows if it’s the right path for you. If you feel like doing it, go for it!

Nagia: You should do it! You learn a lot, you get closer to the people, and you can always plan it with your other courses. It doesn’t take that much time and the trainings are really helpful, regardless of the project.

Camden: Do it! It’s a good way to learn skills and get real world knowledge without it taking over your whole life, and it wasn’t based around an exam period.

Jelle: It is a really good way to make practical use of what you know, and you will never get to do that for a non-profit again. So it’s a great thing to do alongside your studies.