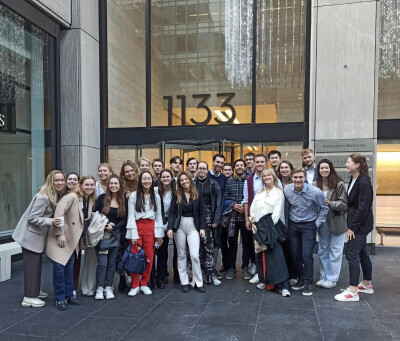 The annual International Study Project (ISP) headed to New York City for this year’s edition. From the 29th of October until the 6h of November a select group of (mostly) master students in Econometrics & Actuarial Sciences from the VSAE visited the Big Apple. Celebrating Halloween, watching an NBA (basketball) game, and visiting several companies have kept us pretty busy throughout the week. First of all, a big thanks to ING and Deloitte for making this trip possible! Without them, it would not have been possible to get familiar with the city and its working culture.

The organisation of the trip started back in January this year. With a lot of enthusiasm, the committee started to fantasise about all the possible destinations. After getting our thoughts aligned we created a shortlist with several destinations. When the acquisition started, the willingness of companies to sponsor was somewhat disappointing, mainly due to the fact that many companies abroad were still affected by covid-19. But fortunately, we’ve found two amazing sponsors which we’ve visited in Amsterdam and in New York City. It was a truly enriching experience to visit the same companies in different countries.

Then when the time was finally there, the trip started with a smooth flight to JFK airport. Before the plane had even set foot on the ground the skyscrapers had already caught our eyes. Besides the view of enormous houses near the beach, the horizon was filled with these high buildings.

On the first day there we visited the Down Under the Manhattan Bridge Overpass, more known as the DUMBO district. Known for its creatively oriented neighbourhood where most of its character is due to its industrial architecture. As most tourists do, we’ve also walked across the Manhattan Bridge. To get the group more acquainted with each other the committee organised a dinner for everyone, this was a great start to the week. Getting to know each other, the typical food (fast food), and last but not least the introduction of the term “voetbalcola”. Later that evening we went to Times Square and a typical American Sports bar.

The next day was the celebration of Halloween, straight through the heart of the city a Halloween parade was organised. Of course, this was something that we couldn’t miss. After this parade, we went to an Irish pub where three of our students had won the outfit competition!

On Wednesday morning we visited the Deloitte office, the office was located in the well-known Rockefeller centre. The morning started with some bagels and coffee on the 30th floor and a presentation on Deloitte, followed by a panel discussion with several employees.  One of the employees was a dutchie, he had started his career with Deloitte back in the Netherlands and travelled a lot to New York City for work reasons. He finally decided to move to New York and could thereof clearly state the difference between the working culture in the countries. After this presentation, we were given a tour around the office and even headed to the 49th floor, which had a stunning view of the city and Central park. This morning was followed by a lunch with a different team from Deloitte.

Afterwards, we headed to the University (NYU)  for a campus tour. The tour started with a presentation regarding the possibilities for postgraduates. Followed by a tour through the campus, which was located in the middle of Manhattan. This was an interesting experience and has helped us to compare the life of a student at NYU to that of our own at the UvA.

The following day we went to the office of Milliman. Here we were introduced to the line of work Milliman does in New York City, ranging from pension products to auditing other firms.  Also, we got a glimpse of the procedure of becoming a registered Actuarial Scientist in the United States.

At the end of the week, we visited ING’s office. Here we started with a presentation about what ING does and a clear and interesting explanation of the International Traineeship Program. One of the traders of the local office joined us to talk about the difference between trading over there and in London. Afterwards, we got an opportunity to get a brief overview of the office and the trading floor. This was followed by an interesting panel discussion with two employees who joined ING a long time ago, they explained clearly how ING banking differs from the other banking companies in the city.