After the three inhouse events in the Netherlands, about which you could read in an earlier Aenorm article, the lucky few who were selected for the International Study Project finally departed for the USA a few weeks ago. Philip Lankhorst wrote a report, so that those of us who did not go can still find out what they did there. Special thanks to Lasse Liebrand for providing us with all the pictures! 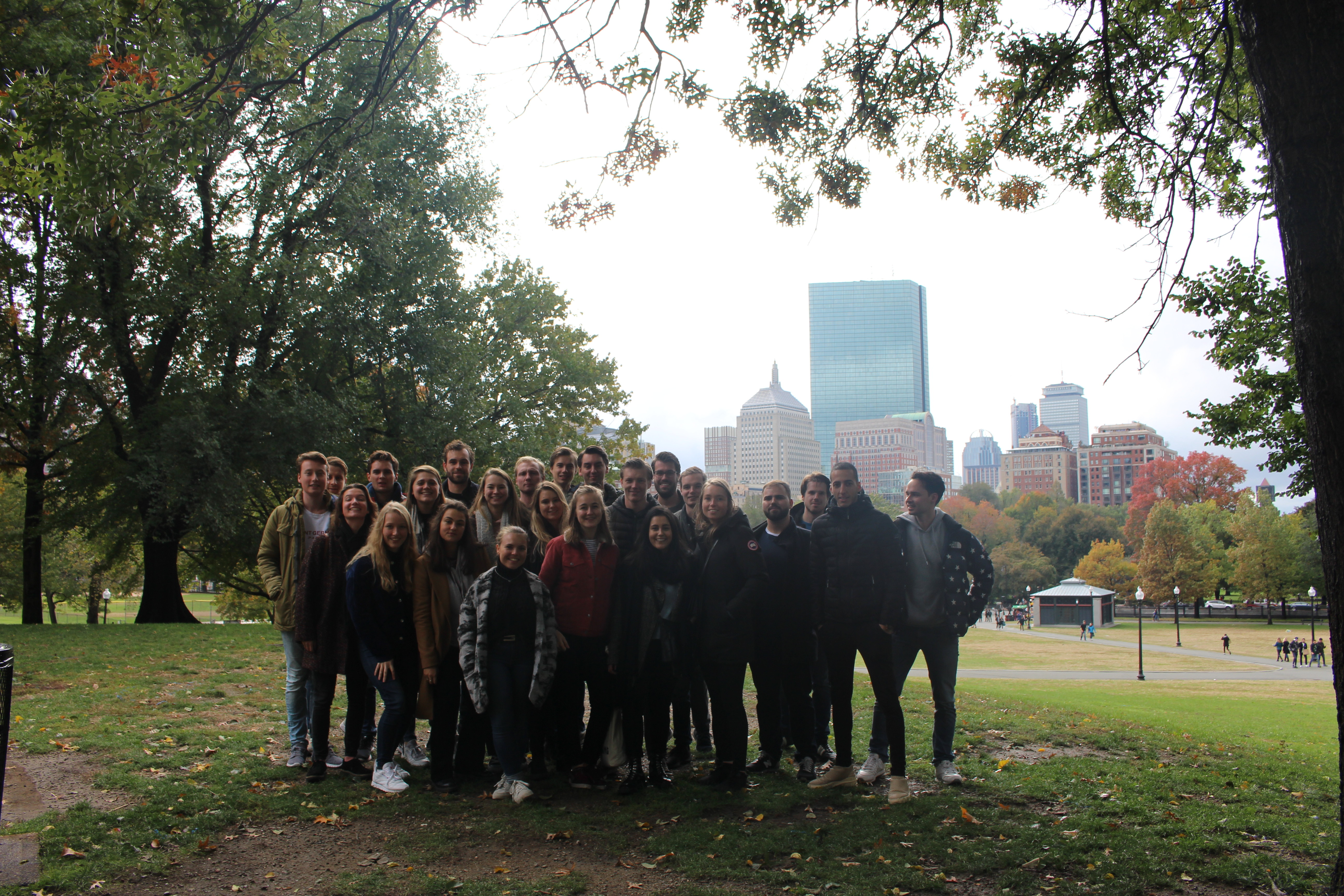 Early in the morning of the 27th of October, 24 VSAE members gathered at Schiphol Airport. Some students arrived earlier than others, but in the end everyone was relatively on time and we boarded the plane without any problems. At the end of the day, we arrived in Boston, Massachusetts, where it was 1 in the afternoon. After checking in at the Buckminster hotel, most people took some time to go sight-seeing. Others couldn’t resist the temptation of their made up beds and didn’t leave their room until the next morning.

After a very jet-lagged night of sleep, we went on a tour of the historic city centre, following the famous Freedom Trail all the way from Boston Common to the USS Constitution. The tour marks many important buildings and sites from the American Revolution and passes through most of the city centre, so it was useful for knowing how to get around for the remainder of our stay. Since most of us had learned something about the American Revolution in school, it was interesting to see some of the famous places in real life. On the same day, the Boston Red Sox won the World Series, meaning there were many celebrations around the city planned for the upcoming week. We couldn’t celebrate too hard though, because we had to be at the Massachusetts Institute of Technology at 9.30 the next morning. 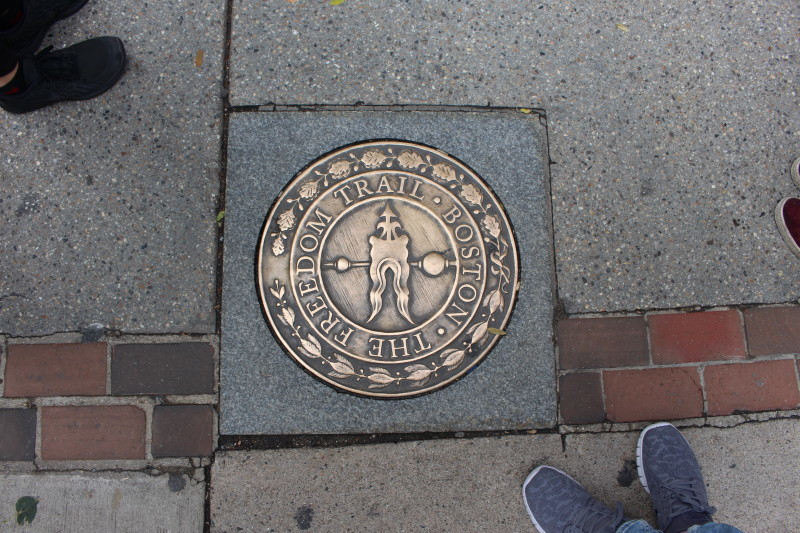 Our tour guide at MIT, Karen, started off the tour by telling us about the Halloween celebrations the weekend before. Because Halloween fell on a weekday, they celebrated Halloweekend by throwing pumpkins off the roof of the Green Building, a 90 m tall monolith that houses the MIT Department of Earth, Atmospheric and Planetary Sciences. This was easily visible as soon as we stepped outside, since there were many orange carcasses lying around the fields. Although the tour finished at 11, we still had some sightseeing to do, so we walked back over the Harvard Bridge, which was measured 364.4 times the height of a certain Oliver Smoot, who was a fraternity pledge at a Harvard fraternity in 1958. As part of his hazing ceremony, he was laid out across the bridge 364.4 times. Although it would take a few more days before we were going to Harvard, this provided us with a nice preview of what we could expect to see there. 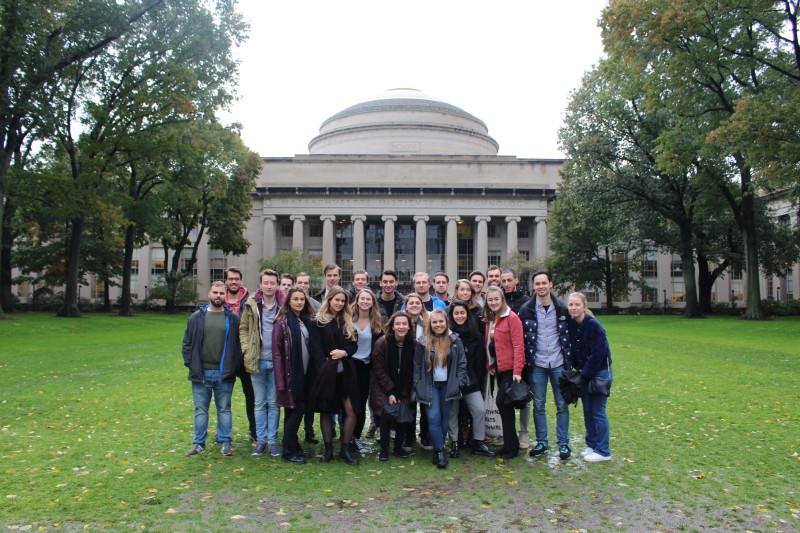 Tuesday marked a more serious walk than Sunday. The Black Heritage Trail is a trail that marks the dark history of slavery and racial segregation in the United States. Since Massachusetts was the one state that abolished slavery in 1780 (more than 80 years before the rest of the country), it was a safe haven for freedmen and other formerly enslaved people. The tour crossed the Freedom Trail a few times, but instead of the Americans rebelling against the British, this one told the painful story of slaves standing up against a society that treated them as inferior. The Black Heritage Trail certainly left an impression on many of us, which was hard to shake off before the evening’s programme; the NBA game Boston Celtics - Detroit Pistons, which the Celtics won 108-105 after a very tense match. 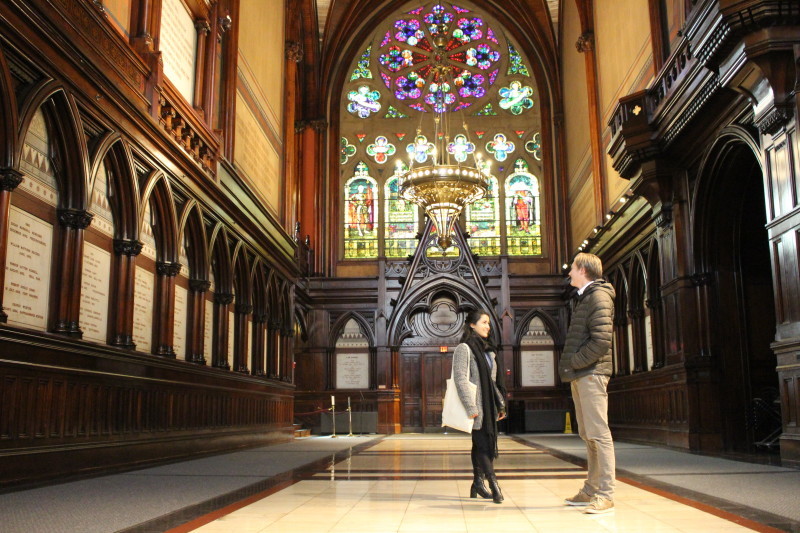 The next morning, we had to leave on time again, as we were visiting a lecture at Harvard University that started at 9. The lecture on IV regression taught by James Stock (well-known by economics students for co-authoring Introduction to Econometrics) was understandable for most of us, but it was certainly inspiring for everyone to be in a lecture at one of the world’s best universities. Afterwards, we had lunch with a group of PhD researchers, including Gregor Schubert, whom you may remember from this publication’s interview during the Econometric Game. This wasn’t even the end of our visit, as we also got a tour of Harvard’s premises in the afternoon. Since it was Halloween (31st of October), we departed for a pub crawl in the evening. The pub crawl ended after less stops than we all expected, because Hong Kong Karaoke turned out to be the perfect place for a group of VSAE members to spend their evening.

Understandably, we didn’t have any plans the next morning, but in the afternoon we paid a visit to Mercer, a human resources consulting firm. They employ actuaries and other mathematically-minded graduates, making them a fitting company to visit. While enjoying coffee and some donuts, we were informed about Mercer’s activities in the United States and globally. Although some of us were still feeling unwell from the night before, the major part of the group enjoyed the visit and we were very thankful to Mercer for hosting us. The evening part of the programme was free, but most of us visited the Boston Symphony Orchestra, one of the leading orchestras of North America which played Elgar, Turnage and Haydn. Thankfully, most of us managed to stay awake and enjoy the music, unlike some others who will not be named. 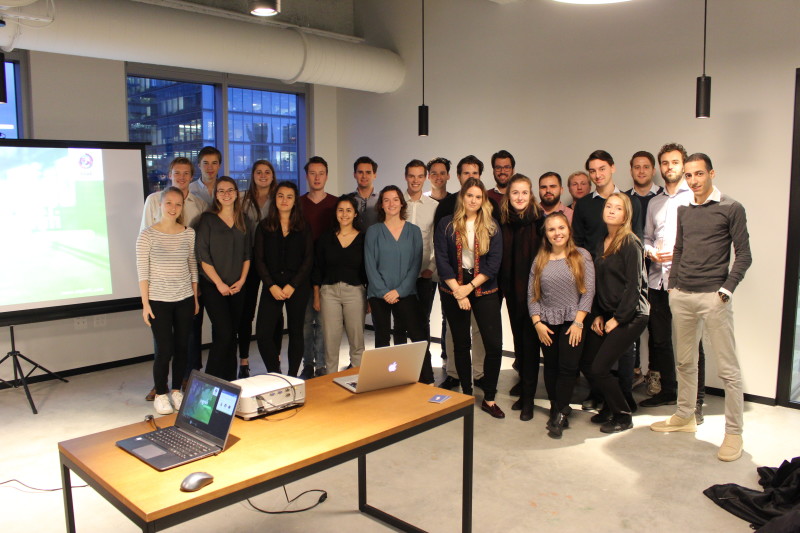 Friday was one of the last days of our stay in Boston, but definitely wasn’t boring. In the morning we visited Emulate, a startup company focused on the commercialisation of the Organ on a chip. Their cutting-edge research was certainly interesting for those of us that knew our biology. In the afternoon, we visited Cignifi, another startup company that provides second opinions after people in developing companies have received a negative credit score. The visit to Cignifi was supposed to last for an hour, but we ended up staying there for double that time because it was so inspiring to see what a relatively small company can do for less privileged people in remote parts of the world.

On our final full day in Boston, everyone was free to do what they wanted. Some went to New York, some went to a National Park, some stayed in the hotel for most of the day. All in all, we all enjoyed the weekend in our own way. Everyone knew we had to check out of the hotel on time on Sunday, however, so we had to make our plans for the final day as well. On Sunday we left for Amsterdam again, where we landed at 8 in the morning. All tired and satisfied after more than a week in the beautiful city of Boston, most of us went straight to bed, except for those who still had to take a quick exam. Thanks to everyone involved for organising such an amazing trip!